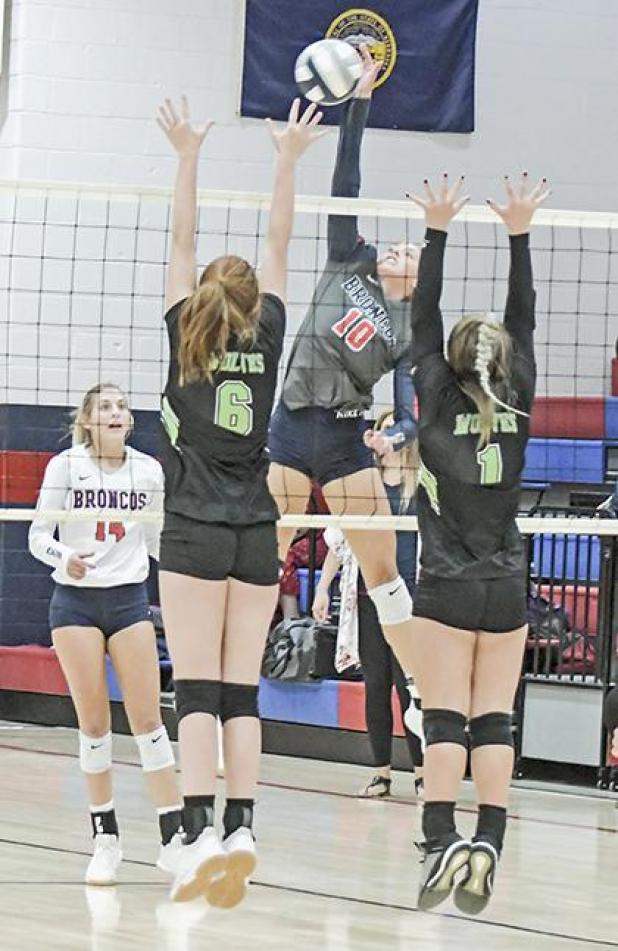 Haylee Sandman hits over the Maywood/Hayes Center block during Thursday’s match against the Wolves. Sandman finished with 21 kills in the match.

With only two weeks until the RPAC conference tournament and three weeks until sub-districts, the Wauneta-Palisade volleyball team split games with Dundy County-Stratton and Maywood/Hayes Center.
Though WP got the win at DCS, the first set was a close one.
The Broncos trailed 10-12. DCS also held a 22-23 lead before Payton Yearous closed out the set with an ace.
The second set was close, as well, until a serving run by Alexa Sandman gave WP a five point advantage, 16-11. The Broncos won the set 25-19.
Yearous started WP off with a five-point run to begin the third set. A. Sandman added another nice serving run as the Broncos cruised to a 25-12 win.
WP coach Terra Higgins credited the Tigers for being scrappy on defense.
“They did well out of system and always found a way to send an aggressive ball,” Higgins said. “I thought our girls did a good job adjusting to their hitters and block. It was a good win for us going into the MHC game.”
Haylee Sandman had 13 kills to lead WP. Cali Cox also finished in double figures with 11 kills.