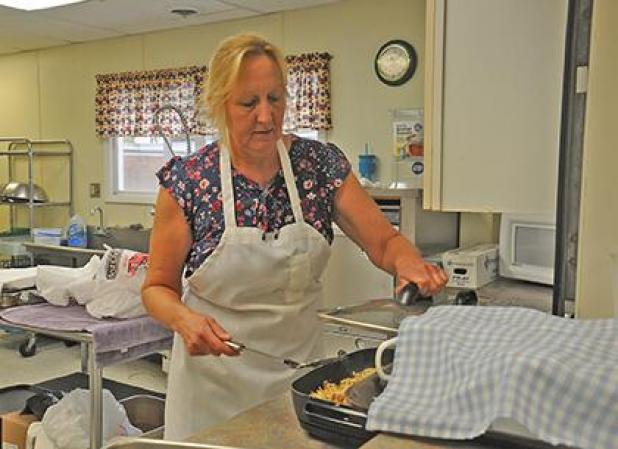 New Wauneta Senior Center cook Teri Keller says she hopes to be able to put her own creative stamp on the center’s menus.

Teri Keller may not have much formal training as a cook, but what training she has comes from the best kind of teacher: Grandma.
And it’s good training for her new job as the cook at the Wauneta Senior Center, which prides itself on its home-cooked -style meals.
Keller, 58, took over from Jody Merrill about a month ago.
She’s a native of the Denver-Aurora area, but has relatives in Wauneta and has been coming here since childhood.
She and her husband, Mike, moved here about three years ago, since her parents, Jim and Dee Beacham, were living in Wauneta already.
But it wasn’t just family ties that made them decamp from Denver, where she had worked for Oppenheimer Funds for 20 years. The company had been sold, and it looked like a good time to leave. Just as importantly, coming to Wauneta was “just something different,” she said, “getting away from the crime and the people, the slower lifestyle. Traffic was the big thing.”
After moving to this area, she worked at Waypoint Bank and Shari’s Gifts in Imperial, as well as at Walgren’s.
But the Senior Center job has proved a good fit, she said.
“I like people, I like elderly people. I’m a pretty good cook. I’ve been cooking for my family since I was a teenager. I just felt [the Senior Center job] would be something I’d enjoy.”